in 2013/2014 a group of local people met at Macclesfield Community ArtSpace in Sutton Mill, Macclesfield to create a 12 foot triptych of three Banners in a wide variety of textile techniques – embroidery, appliqué, quilting and stump work. The finished pieces were on display in St. Michael’s Church as part of the Barnaby Art Trail, and headed the large Barnaby Festival Carnival Parade  Saturday 21st June 2014.

The 3 Banners show landmarks of Macclesfield, the Silk Industry and many of the town’s colourful characters of the past. The initial idea came from Jill Maguire, a member of Artspace who has spent many years as a painter and weaver, and has worked on many Community Arts projects in Cheshire (Nantwich, Northwich, Sandbach, Congleton, Bollington ), but never in her home town of Macclesfield. The group she gathered together, while not professional needle-workers, have gained in confidence using textile techniques over the months to produce work of a high standard, and this has been evident as work on the banners progressed. They were on view in St Michael’s Church in the Market Place until June 28th  2014 after which the group hope they will become a travelling exhibition in different venues around the town, finally settling into a permanent home for display to the public.

Stephanie Ramage at work on one of the banners 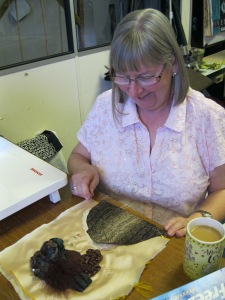 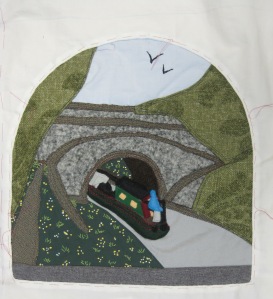 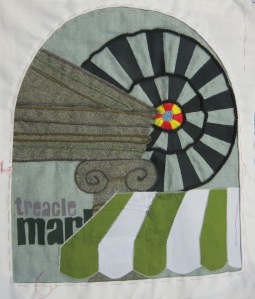 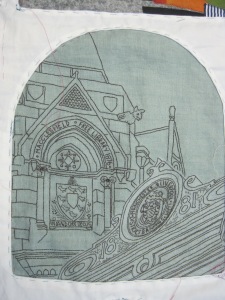 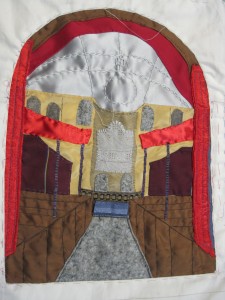 ArtSpace is a charity run entirely by volunteers to provide the people of Macclesfield and surrounding area with a place to make art Our Registered Charity No. is 1153606.